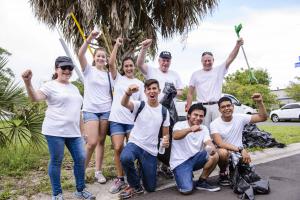 The Way to Happiness volunteers after a cleanup of a Clearwater neighborhood.

Man has gotten up to the potential of destroying the planet. He must be pushed on up to the capability and actions of saving it.”
— L. Ron Hubbard

CLEARWATER, FLORIDA, US, March 21, 2019 /EINPresswire.com/ — On Saturday and Sunday, March 23rd and 24th, The Way to Happiness (TWTH) Association Tampa Bay will be continuing their campaign to clean up litter and save the planet, neighborhood-by-neighborhood in Clearwater, Florida. Hundreds of volunteers have been participating in the group’s weekend cleanups to beautify neighborhoods throughout the city and starting with neighborhoods close to downtown Clearwater where the group has its headquarters. According to TWTH, removing litter, dirt and clutter from one’s area creates a clean and calm atmosphere where one feels happier and more peaceful.

“We really can’t stand by and not take action to clean up our neighborhoods, said Executive Director of The Way to Happiness Association Tampa Bay, Ms. Tanja Cranton. “Having a clean neighborhood also contributes to a safe city as Broken Window theorists have pointed out.” The Broken Window theory by James Q. Wilson and George Kelling uses a metaphor of a broken window for disorder within neighborhoods, linking disorder and incivility to subsequent occurrences of serious crime in the community.

The Way to Happiness Association of Tampa Bay educates communities that litter is not only harmful to the environment it can also carry diseases. Further, cigarette butts are America’s number 1 littered item, are extremely toxic and start fires if they are not put out and discarded properly. According to Keep America Beautiful, $11.5 billion are spent every year to clean up litter in the USA.

The Way to Happiness Association Tampa Bay’s Clean Neighborhoods Campaign is inspired by L. Ron Hubbard’s The Way to Happiness booklet, in which he says, "The idea that one has a share in the planet and that one can and should help care for it may seem very large and, to some, quite beyond reality. But today what happens on the other side of the world, even so far away, can affect what happens in your own home."

"There are many things one can do to help take care of the planet. They begin with the idea that one should. They progress with suggesting to others they should. Man has gotten up to the potential of destroying the planet. He must be pushed on up to the capability and actions of saving it. It is, after all, what we’re standing on. If others do not help safeguard and improve the environment, the way to happiness could have no roadbed to travel on at all."

To join the volunteer cleanup team visit The Way to Happiness center at33 N. Fort Harrison Ave, Clearwater FL 33755, open daily from 10am – 10pm, or call (727) 467 6961. The Way to Happiness Association Tampa Bay is sponsored by the Church of Scientology and is one of Church’s nine humanitarian outreach projects in the community.

The Way to Happiness

The Way to Happiness booklet, written by L. Ron Hubbard, is available in 115 languages, with some 115 million copies distributed in 186 nations. The campaign to distribute the book has been embraced by more than 257,000 groups and individuals. The booklet holds the Guinness World Record as the single most-translated nonreligious book and fills the moral vacuum in an increasingly materialistic society.