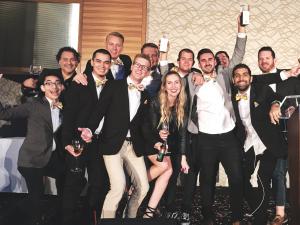 “Work culture sets limits to the creativity of the talent working in an agency,” says Ville Houttu, CEO of Vincit California. “I am proud to see we have managed to create a diverse workplace where all flowers can bloom.”

“It’s an honor to be recognized for the work that we do. These awards are a testament to the hard work we bring to each project and to the innovation and creativity we hope to always bring to the table,” says Cameron Sagey, Lead Designer of Vincit California.

The awards were publicly announced at The American Advertising Federation’s ADDY Awards on Thursday, March 21 at the Pasea Hotel in Huntington Beach.

Vincit is a software development and design company based in Irvine and Palo Alto, California, and Tampere, Helsinki and Turku, Finland. Founded in 2007, Vincit currently employs more than 450 professionals. Ranked first in Europe in the Great Place to Work study, Vincit's success stems from satisfied customers and satisfied employees. Vincit is listed on the Nasdaq OMX First North market. www.vincit.com