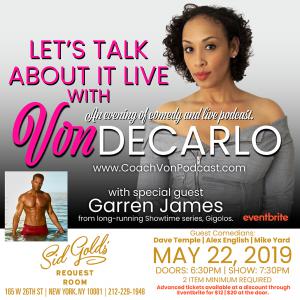 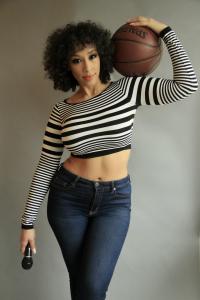 Much like an NBA player, I won’t quit because I got a bad foul call from the refs. I will get back on the court and slam dunk it in their face.””
— Von Decarlo, Host of Let's Talk About It with Coach Von

NEW YORK, NEW YORK, USA, May 15, 2019 /EINPresswire.com/ — Popular, stand-up comedian, author and broadcaster, Von Decarlo was the very first woman and comedian to host her own show on SiriusXM’s NBA channel, Coach Von’s Corner, that premiered in October and after five episodes was put on a “Holiday Hiatus” that never ended, and for the very first time, is publicly talking about her bizarre and untimely dismissal.

“I was very proud to be the first woman, and the first comedian, to host her own show on the SiriusXM NBA channel. I opened an entirely new audience to the channel with my diverse way of commentating on the games as well as players with their off the court endeavors. However, my show was cancelled without warning or a clear understanding as to why. I was just told that the nameless, faceless powers that be within their NBA partnership was uncomfortable with the content and my comedic approach,” says Decarlo. “I experienced an unbelievable amount of censorship during my season on the channel, which made the show a lot less fun than what it should have been for me. But, much like an NBA player, I won’t quit because I got a bad foul call from the refs. I will get back on the court and slam dunk it in their face.”

Von Decarlo, always one to keep her eyes on the future, continues her popular show, the Coach Von Podcast, in a new, different and exciting way beginning on May 22nd, with a live comedy show, following a live podcast, at New York City’s Sid’s Gold Request Room.

“That is exactly why I started my Patreon account where I can have candid conversations with athletes, comedians, actors and all kinds of notable personalities in a fun, uncensored, fearless way to give the fans what they want. Players are not just “shut up and dribble,” says Decarlo. “Much like comedians, they have amazing life experiences with unique perspectives on life, love, relationships, politics, pop culture, and more. Funded by the patrons low cost subscription, the Coach Von Podcast will be independently produced, enabling me to expand the conversation far beyond what the NBA channel on Sirius XM would allow, and I am excited to have the freedom to move past their untimely release of what was on the mark to becoming a hit show.”

The premiere of the special monthly edition of the Coach Von Podcast, Let’s Talk About It Live, will feature comedians Dave Temple, Alex English and Mike Yard, and a very special and rare live appearance by Garren James the creator and one of the stars of long-running Showtime series, Gigolos, who will sit down with the Von and the comedians and discuss the chosen topic of the evening.

To donate to Von Decarlo’s Patreon you may go here https://www.patreon.com/coachvon

To purchase tickets to the premiere of Let’s Talk About it Live with Von Decarlo go here https://www.eventbrite.com/e/comedy-show-podcast-lets-talk-about-it-live-with-von-decarlo-tickets-60294908695

Sid’s Gold Request Room is located at 165 W 26th St, New York, NY 10001 and you may follow them on their website at https://sidgolds.com/ and on social media on Facebook at https://www.facebook.com/SidGolds/ and on Twitter at https://twitter.com/sidgoldsreqroom

You may follow Von Decarlo on her website www.coachvon.com, on Twitter at https://twitter.com/vondecarlo and on http://instagram.com/vondecarlo . You may purchase a copy of her book, Speak Fluent Man on www.SpeakFluentMan.com and you may follow her podcast here www.CoachVonPodcast.com

Von Decarlo is a multi-talented stand-up comedian, actress, and author of the book, Speak Fluent Man. An avid sports lover, Von Decarlo grew her fan base with a sketch comedy web series and blog called, Trash Talk with Von Decarlo, in which she tackled pop culture, sports and relationships in a fun, yet informative way. From the popularity of the show, as well as her growing social media following, fans began to call her "Coach Von" in relationships and sports.

She started to make regular appearances on television and radio as a life coach, and became a mainstay on SiriusXM NBA Radio, as well as, SiriusXM Urban View. She completed two seasons as a talking head comedian on BET/Centric's relationship-based show, According To Him + Her, and is featured on Tru-TV's hit comedy show, Laff Mobb's Laff Tracks. In addition, she performed at the Just For Laughs Comedy Festival in Montreal for Kevin Hart's LOL Network, JFL Present's LOL Live. You can also catch her in commercials for GNC, Disney’s Aladdin, Carnival Cruise Lines, and on the 2018 year-end wrap up special for CNN's AC360.

Ball is life, literally on the Coach Von Podcast, as Von Decarlo uses current events and sports to anchor into fun, yet honest, conversations about life, love, and relationships. You can find her performing stand-up comedy at many premier venues throughout New York City, and her one-woman show, Lasagna, debuted at The People's Improv Theatre to a full crowd and rave reviews. She is a graduate of the UCB improv program, a founding member of the musical improv group, Good Catch Comedy, and a UCB diversity scholarship recipient. Von Decarlo is a double first name, and yes, her mother named her after Lily Munster.

By digging deep into topics such as entitlement, double standards, logic vs emotions, and more, Von Decarlo brings to you a very in-depth, personal memoir for both men and women. Don't let the title fool you! Whether you are male, female, heterosexual, bisexual, transsexual, or transgender, Speak Fluent Man, can help you realize the full potential in any type of relationship, by helping you understand how to have the courage to live in your own truth, and accept the truth of others unconditionally. For more information and for purchase options go to www.SpeakFluentMan.com .