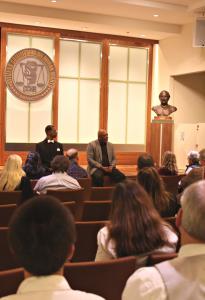 The Church of Scientology held a rally to raise awareness of the continued use of Electro Convulsive Therapy and demand its ban as a mental health tool.

SACRAMENTO, CALIFORNIA, UNITED STATES, May 18, 2019 /EINPresswire.com/ — Marking the International Day Against Electro Convulsive Therapy, the Church of Scientology of Sacramento played host to Reverend Frederick Shaw, Jr. who came with an impassioned message to rally support for a protest march happening Saturday May 18th in San Francisco against the American Psychiatric Association where they are hosting their annual convention. The purpose of the march is to not only raise awareness that indeed ECT is still in use today but to demand an end to its use and urge a ban of ECT as a mental health treatment.

Reverend Shaw is a past-President of the Compton Branch of the NAACP, and the first President from Compton to be appointed to a California State Chair overseeing “The Children’s Task Force.” As the President of the NAACP, he lobbied the US Congress alongside the Citizens Commission on Human Rights to get passed into law the Child Medication Safety Act, which gives parents the right to refuse psychiatric drugs for their children as a provision for attending school.

He is now taking on ECT and calling out psychiatrists to end this abusive therapy. He also voiced concerns about psychiatrists being granted too much authority in law to hold, seize and treat people against their will and urged all present to attend the protest and let their voices be heard on this matter and other issues of importance.

The Public Affairs Director for the local Church in Sacramento told attendees, “It is very much a part of the Church’s Founder L. Ron Hubbard’s vision that Scientologists work to restore the field of mental health to a more humanitarian approach and stand up for those abused and damaged by psychiatric treatment.”

For more information about the Church and the Citizens Commission on Human Rights visit them on their websites at: https://www.scientology-sacramento.org/ and https://www.cchr.org/