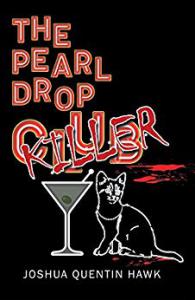 Fourteen young women have turned up dead in the Sherman forest near the Sherman Estates, owned by an old family with a dark and scandalous history. The main character, T.K. Donovan, a forensic psychologist and investigator, returns to Jackson Hole County to help his old partners. A sleepy town is about to be woken up from its unsympathetic past.

Donovan and the Jackson Hole Sheriff’s Department must follow the clues, which are nearly identical to a case Donovan’s father worked on thirty years ago. It had cost his father his life and could cost him his, too. In the process, Donovan digs into old family histories, secrets, and long-dead skeletons. Will he be able to solve the case before the Sherriff closes it as he did before, and save his daughters in the process?

When asked about what inspired him to pen this thriller, Hawk replies, “After I was placed back on dialysis, I was back to a point in my life where I was unable to work, so I told myself, it’s time. Then I started my research between publishers and self-publishing. I thought there was not much on a female serial killer nor on a same-sex killer. I felt it was time, and with the social concerns going on now that can reflect the sixty, should be owned up to. I was hoping we can all get along and move past racial and social violence and have more continuity.”

Joshua Quentin Hawk’s second book, “The Lost Outpost,” is now out in the market. Check out his website, www.joshuaquentinhawk.com, to learn more.

About the Author:
Joshua Quentin Hawk, born Thomas Roy Bass, from Portsmouth, Virginia, has lived in Texas and California, now presently in San Diego, California for most of his childhood and adult life. After many years of medical issues due to kidney failure and transplant, he now has the time to write. He has worked in the technology industry in the past as a Network Engineer and has studied Geological, Environmental, and Oceanographic Sciences, in addition to other science courses—Forensics Sciences, Psychology, and Criminology—to gain an understanding of both areas. He has always wanted to be a writer, so he told himself, “I have the time.”

Book copies are available at Amazon, Barnes & Noble, and other online book retailers.