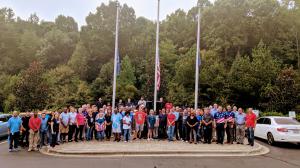 Employees of PCI Group gathered at 8:46 AM today outside the company’s headquarters to honor the brave men and women who lost their lives on September 11 2001.

Coming from New York, we felt the impact of this event in a way only New Yorkers understand. We had to do something to honor those who lost their lives and the first responders who sacrificed theirs”
— Chris Kropac, Owner

FORT MILL, SC, USA, September 11, 2019 /EINPresswire.com/ — The employees of PCI Group gathered at 8:46 AM today outside the company’s headquarters to honor the brave men and women who lost their lives on September, 11, 2001. This year marks the 18th consecutive year that PCI has gathered to honor the over 2900 civilians, firefighters and rescue workers that were lost during the attack.

The gathering took place in front of the 9/11 monument constructed just outside of the entrance to PCI in 2011. The monument features two towers (symbolic of the Twin Towers attacked on 9/11) which are constructed of 100% solid, jet black granite with a polished mirror finish. Inscribed on the front of the base of the towers are three commemorative passages: “We Will Always Remember September 11, 2001”, “Dedicated to Those Who Lost Their Lives and the Brave Who Gave Theirs”, and “God Bless America.” As a reminder for future generations, the expressions “Celebrate Life” and “Salute America and Its Heroes” are inscribed on the back of the base. Between the towers is a hand-crafted bronze eternal flame. Framing the monument are two benches and four flags: the American flag, a 9/11 flag, the South Carolina flag, and the PCI Group flag.

For Chris Kropac, President of PCI Group, a company founded in New York in 1970 until its relocation to Fort Mill (Lancaster County), South Carolina in September 2008, the events of 9/11 hit hard. With deep roots, including a former office space in the south World Trade Center in the late 80’s, and family ties to New York, the attack on the Twin Towers left indelible scars and losses for Chris and many of the company’s employees just as it affected other Americans, and especially New Yorkers. When asked why he had the monument built, Kropac thought instantly of his two children, Christian, now 18, and Carissa, age 15. He wanted them to understand the significance of a “day that changed our nation…and our world forever.”

“Coming from New York, we felt the impact of this event in a way only New Yorkers understand. We just had to do something to honor those who lost their lives and the many brave first responders who sacrificed theirs to try to save others,” said Kropac. “This is our generation’s Pearl Harbor and I wanted my kids and other children to understand what happened and how the world was profoundly changed by the senseless attacks in New York, Washington and Pennsylvania.” When someone asks why we have made this investment in a 9/11 monument on private grounds, I tell them, that’s why. Because I want my kids to know what happened and never forget.”

About PCI Group
PCI Group is a leading provider of mission critical communications for businesses where security of customer-centric data is paramount, precision and accuracy are crucial and compliance is a must.

As a family owned business since 1970, PCI Group has been providing customers fast, secure, and cost-effective printing and document delivery that is fully compliant with federal regulations including HIPAA, HITRUST, FISMA and SOC I & II and PCI DSS. PCI’s real-time, web-based, customer control center enables customers 24/7 access to updated information and tracking reports about their communications at any point from pre-production through delivery.

For close to 50 years, PCI Group has been the company customers can rely on to handle every detail—time after time. For more information about PCI Group, please visit us online at http://www.pcigroup.com.