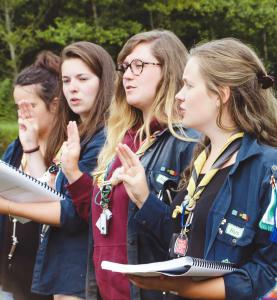 The Scout BSA Troop 313, chartered by the Church of Scientology threw themselves in the race to have their first girl Eagle Scout with their new girl troop. The all-girl troop meets on Monday nights at the Clearwater Community Volunteers Center located on

Of all the information which became important to me, such as photography, woodlore, signaling, and many other subjects, the basics of it was laid in Scouting.”
— L. Ron Hubbard

CLEARWATER, FLORIDA, US, September 19, 2019 /EINPresswire.com/ — Scout Troop 313, chartered by the Church of Scientology Flag Service Organization, launched their first girl troop on Monday 16th September. The troop meetings will be held every Monday evening at 7PM at the Clearwater Community Volunteers Center, which already hosts a boy patrol for Troop 313.

The Scouts of America (BSA) first announced it was going to include girls in 2017. The change was applauded by many girls and families whose daughters had been tagging along and participating in their brother’s Boy Scout events. Instead of being called “Boy Scouts” the organization changed its name to Scouts BSA.

The change also means that girls can now work toward the goal and honor of Eagle Scout, the highest rank possible for a Scout which can offer lifelong academic and professional benefits.

“Several of my friends are part of the boy patrol”, said Nikka Bestenlehner, who was the first girl to sign-up as a member of Troop’s 313 all-girl patrol. “I tag along when they have the meetings at the Clearwater Community Volunteers Center. I find it really cool to be involved too. I like camping; I like the outdoor activities so this is really going to be a fun experience. I would like to be the first girl Eagle Scout for troop 313!”

"Through Scouts, more young people than ever before — young women and men — will get to experience the benefits of camaraderie, confidence, resilience, trustworthiness, courage and kindness through a time-tested program that has been proven to build character and leadership," said Michael Soltero, who manages the Clearwater Community Volunteers Center.

Scientology founder and humanitarian L. Ron Hubbard, who himself was an Eagle Scout, summed it up with what he wrote, “Of all the information which became important to me, such as photography, woodlore, signaling, and many other subjects, the basics of it was laid in Scouting.”

For more information or to join one of Troop’s 313 patrols contact Michael at the Clearwater Community Volunteers Center at (727) 316-5309 or email ccvcenter@ccvfl.org.

About the Church of Scientology

The Scientology religion was founded by humanitarian and philosopher, L. Ron Hubbard. The first Church of Scientology was formed in the United States in 1954 and has expanded to more than 11,000 churches, missions and affiliated groups, with millions of members in 165 nations. Scientologists are optimistic about life and believe there is hope for a saner world and better civilization, and actively do all they can to help achieve this. The Church of Scientology regularly engages in many humanitarian programs, such as anti-drug campaigns, human rights campaigns and global education programs. To learn more, visit www.scientology.org.