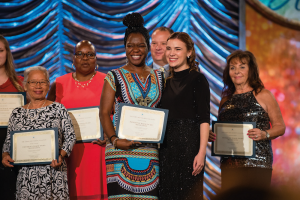 The Tampa Bay Charity Coalition celebrated its 5th Anniversary on September 14th, in the historic Fort Harrison. Over 100 Tampa Bay charities were represented. Pictured above is awardee Anna Jones from Urban Progress Alliance.

Charity Coalition members are making a huge difference. Whether they feed the hungry, tutor kids or provide shelter for those who need a break, they are out there providing selfless service.”
— Clemence Chevrot, event organizer

CLEARWATER, FLORIDA, US, September 19, 2019 /EINPresswire.com/ — On September 14th, more than two hundred people gathered in the historic Fort Harrison in downtown Clearwater to celebrate the 5th Anniversary of the Tampa Bay Charity Coalition. One hundred charities were represented, including Toastmasters, Children with a Vision, Global Community Tennis and PACE Center for Girls.

“The Charity Coalition is a network of non-profits that fosters collaboration, thereby creating a better community for everyone,” said Clemence Chevrot, the Community Affairs Director for the Church of Scientology Flag Service Organization and the organizer of the event.

A student from Clearwater Academy International opened the event with the song “Flashlight” followed by the youth of Groupo Folklorico Mahetzi performing traditional Mexican folk dances. Awards were then presented to non-profit volunteers.

“Charity Coalition members are making a huge difference,” said Ms. Chevrot. “Whether they feed the hungry, tutor kids or provide shelter for those who need a break, they are out there providing selfless service. This has not escaped the notice of our nation, as evidenced by the fact that in the United States, Tampa Bay now ranks 4th in charity production.”

The first award, the Certified Smile Maker, was dedicated to youth who are creating a change in our community. Five youth, between the ages of 4 and 13 were acknowledged. All of the youth had volunteered over 50 hours in the past year. The next awards were the Bronze, Silver, Gold and Diamond Making the Difference Awards. They were based on volunteer hours as well. 31 awards were presented.

Recipient of the Gold Making the Difference Award, Dr. Veronica Walters, founder of the Walters Academy of Entrepreneurship, said, “We, volunteers work for the simple goals of making a better community. We do not expect anything in return. This award means a lot to me and I am very proud to be part of the Charity Coalition.”

About the Church of Scientology:

The Scientology religion was founded by humanitarian and philosopher, L. Ron Hubbard. The first Church of Scientology was formed in the United States in 1954 and has expanded to more than 11,000 churches, missions and affiliated groups, with millions of members in 165 nations. Scientologists are optimistic about life and believe there is hope for a saner world and better civilization, and actively do all they can to help achieve this. The Church of Scientology regularly engages in many humanitarian programs, such as anti-drug campaigns, human rights campaigns and global education programs. To learn more, visit www.scientology.org.

The doors of The Fort Harrison, the Church of Scientology Flag Service Organization’s signature retreat, are open for non-profit organizations and charities to hold their own events.