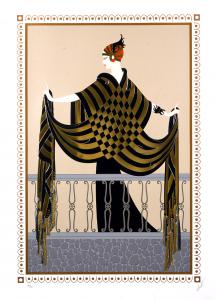 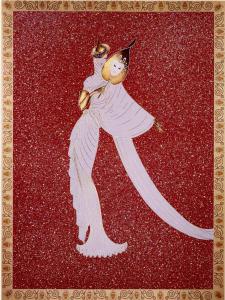 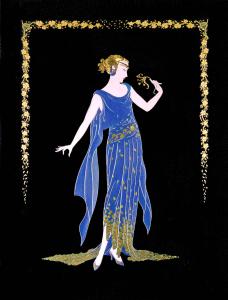 You look at his art, and you know that it's his. I appreciate originality and things that have stood the test of time.”
— Barbara Streisand

Erté – whose real name was Romain de Tirtoff (initials “R.T.”) — was born in 1892 in St. Petersburg, Russia. In 1910, he moved to Paris to pursue a career as a designer, despite objections from a father who wanted him to become a naval officer. In 1915, he secured his first substantial contract with Harper’s Bazaar magazine, and thus launched an illustrious artistic career that included designing costumes and stage sets. Between 1915-1937, Erté designed over 200 covers for Harper’s Bazaar, and his art would also appear in such publications as Illustrated London News, Cosmopolitan, Ladies Home Journal, and Vogue.

Erté is known as ‘the father of Art Deco,’ and his fashion designs captured the period perfectly. His delicate figures and sophisticated, glamorous designs draped renowned screen actresses from Lillian Gish and Marion Davies to Norma Shearer and Joan Crawford. His ideas and art continue to influence fashion today. In 1925, Louis B. Mayer brought him to Hollywood to design sets and costumes for the silent film Paris. He went on to create for such films as Ben-Hur, The Mystic Time, The Comedian, and Dance Madness. Well, into his nineties, Erté designed the costumes for the musical Stardust and the costumes for the Rockettes’ Easter Parade at Radio City Music Hall in New York. His stage sets were featured in the Ziegfeld Follies and Folies Bergère.

Erté’s art can be found in the collections of several well-known museums, including the Louvre, the Metropolitan Museum of Art, the Victoria and Albert Museum, and the Los Angeles County Museum of Art (LACMA). In 2016, MLG contributed to the monumental solo exhibition of Erté’s masterworks at the Hermitage Museum in St, Petersburg, Russia – Erté: An Art Deco Genius. Return to St. Petersburg – which was staged more than a century after he originally left his native Russia.

Visit Martin Lawrence Galleries from December 1st – December 31st, 2019, to view some of his most significant work in person.

About Martin Lawrence Galleries
Since 1978, Martin Lawrence Galleries, headquartered in Greenwich, Connecticut with nine gallery locations nationwide including New York, Chicago, Dallas, Las Vegas, New Orleans, San Francisco, Costa Mesa, La Jolla, Maui has been assisting and advising collectors as they acquire fine art. MLG is the publisher of fine art prints and sculpture and is also the home to modern and contemporary masters like Picasso, Chagall, Warhol, Calder, Magritte, Basquiat, and Murakami. We are incredibly proud to have lent and exhibited over 200 masterworks, created by more than 30 different artists, to 30+ world-class museums around the globe including the Louvre, the Pompidou, the Metropolitan, the Whitney, the National Gallery, the Tate and the Hermitage-where we are the sole sponsor of the first-ever exhibition of the work of Erté, the father of art deco and we proudly publish works by artists including Kondakova, Hallam, Bertho, Fressinier, Lalonde, and Deyber. For more information visit martinlawrence.com