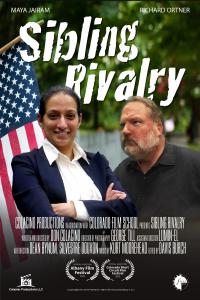 Sibling Rivalry is a film about brother and sister competing in a small town election.

In “Sibling Rivalry” a small town election becomes a battle of ideals for a brother and sister who run against each other for village trustee. “It’s ‘House of Cards’ meets ‘Parks-and-Rec’” says writer and producer, Don Colacino, who also directed the film. “The script has a tortured history, evolving from a really twisted family tree story to the quirky political satire that made it to the screen. I feel really lucky to have had such a great cast and crew who worked well together and made the set a lot of fun. Maya Jairam and Richard Ortner, my two lead actors, are just so perfect in their roles! During filming I almost ruined a couple of takes by laughing as I watched the monitor.” While the cast was comprised of both professional actors like Jairam and Ortner, the crew were entirely students at the time. Most have now graduated to professional careers in the film industry in Hollywood, Albuquerque, and other film-friendly locales, as well as in Colorado which is home to a robust and growing filmmaker community.

“Sibling Rivalry” was released to festivals in December 2019 and will make its screen debut on Saturday, February 29, 2020 at the Ivywild School Events Center in Colorado Springs. Then on Friday, March 27, 2020 it will screen at the University of Albany in the capital city of the filmmaker’s home state of New York.