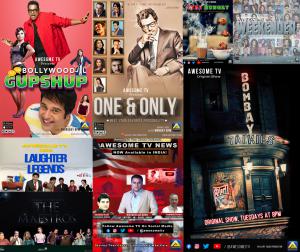 We have proudly raised the bar, changed the landscape & inspired other media houses in South Asian market. We are the pioneers in this golden age of television, Many are following in our footsteps.”
— Ritesh Parikh, Awesome TV creator, founder and CEO.

NEW YORK, NEW YORK, USA, July 13, 2020 /EINPresswire.com/ — Awesome TV, a source of Bollywood, Hollywood, and original content continues to reinvent and make waves even during these challenging times by launching Awesome TV NEWS and multiple NEW shows for all genres. In addition, Awesome TV announces partnership with The Wrap to bring you the latest in Hollywood.

Awesome TV has launched Awesome TV News with Waahiid Ali Khan, Awesome TV Board of Advisory Member as the Editor-In-Chief (India). Waahiid brings tremendous experience and expertise in the news area, launching multiple news networks over the past 2 decades. These are stories that count, from people who care. “Whatever it takes, we report to you first and we bring you the news you want to see,” says Waahiid Ali Khan.

Awesome TV is home to the most watched and followed content from the United States of America (USA), putting it above all other South-Asian networks. This means that you with Awesome TV gain access to local and global content. "With the announcement of the NEW Awesome TV Original shows, we have a plethora of entertainment for everyone" as our India Head Ritvik Asthana says, which will attract audiences of all ages.

Here are the new shows being launched:
– Bombay Talkies, a show about the golden classic era of Bollywood, the untold beautiful stories and memories of Bollywood…
– Stay Hungry, a unique food show, coming directly from the streets…
– SESSIONS, a music show, showcasing known and independent Hollywood artists in partnership with My Jams Network (David Zucker)…
– The Wrap, Partnership with ‘The Wrap’ to bring you the latest of Hollywood…

Ritesh Parikh has put a Global Team together from the Media, Entertainment, Business, and Technology world to create Awesome TV. “We have proudly raised the bar, inspired other media houses and changed the landscape for the South Asian market in North America. We are the pioneers in this golden age of television. Many are following in our footsteps,” said Ritesh Parikh, Awesome TV creator, founder, and CEO.

Awesome TV continues to innovate and has burst forth with more awesomeness in its new personalized apps. Its iOS and Android App, allows you to cast live to your TV, or stream on any device such as your phone, tablet or etc. Watch Awesome TV when you want and how you want!

About Awesome TV: We are the first South-Asian Streaming Network from North America. Awesome TV has made it easier for audiences to interact, watch exclusive Awesome TV shows and bring Bollywood and Hollywood to our global audience on any device.

Only on Awesome TV can you watch some of our existing hit shows “One and Only,” “The Maestros,” “Bollywood GupShup with Pooja Nawathe,” and “Awesome Weekender.”