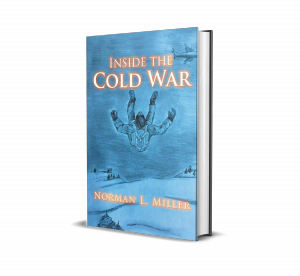 Inside the Cold War

A story involving sports and the collapse of the Soviet Union

COOKSTOWN, NEW JERSEY, UNITED STATES, October 21, 2020 /EINPresswire.com/ — Under normal circumstances, U.S. Bobsled coach Shawn Murphy would be seen as a typical American sports professional. But when the CIA decided to smuggle him back into the Soviet Union for a covert mission, secrets are revealed, and the U.S. Bobsled Federation inadvertently gets entangled in an international web of espionage and diplomatic turmoil. Inside the Cold War, the sequel to author Norman Miller’s first novel, is based on very real experiences during the fall of the Soviet Union in 1989.

Norman is no stranger to government and military operations, having served in the USAF for 33 years. He was the national manager of a highly successful Air National Guard physician recruitment program in the last decade of his service, and when he retired, he owned and ran for 14 years a leadership management training company. These days, his time is dedicated to writing, in addition to being an active member in an orchestra as a trumpet player. And he is also a former bobsled athlete certified as an international Olympic bobsled coach.

The book closely follows the events that unfolded involving Shawn Murphy and the CIA, who wants to use him in order to get valuable documents that could vastly increase the naval superiority of the U.S. The reader is taken for a ride across continents and is made witness to events that can happen underneath the veil of espionage. From thrilling action to spine-tingling suspense, and even some steamy romance thrown in for good measure, this book will be a treat for lovers of the espionage genre.

It is a must have for spy thriller fans everywhere. Get your copy today!

About Writers’ Branding
Writers’ Branding is a full-service self-publishing company that provides aspiring authors exclusive access to publicity and a pool of book evaluators and marketing creatives and bridges them to literary agencies and traditional publishing houses.