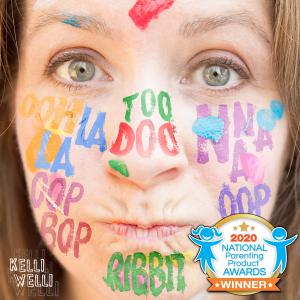 Awarded the 2020 National Parenting Products Gold Award for recognition as the best in the industry.

Praise from the NAPPA Awards: “Very well done, Kelli Welli! The award-winning Portland, OR-based musician exhibits a wonderful sense of silliness for little ones on tracks “Turtlurtlurtle,” “Tacos, Bananas, and Toy Boats,” and “Hello, I Am a Monkey.” But she also reveals (mainly in the middle of the album) a quiet, gentle side with songs like “I’m In Love with You,” “Just Snuggle In” and “La Lullaby.” Wrapping up the album, “Pretend Summer,” “Got So Much Love For You,” and “Cooking Up Some Happiness” provide joyous music for the whole family to enjoy. Good-humored and good-hearted, Ooh La La Too delivers a strong set of twang-flavored songs (you’ll find some fine picking on “Little Ray of Sunshine” for example)… If you’re new to Kelli Welli, this album will serve as a great introduction to her music.”

What is the story behind this album’s unique and very long title? Each part of the title is taken from parts of one or more of the songs in the album… “Ooh La La” is the title of a favorite lullaby Kelli actually wrote first for her doggie… “Too Doo” and “Na Na” are in other songs and lullabies… the “Oop Bops” and “Ribbits” are sounds both frogs and kids are encouraged to make along with “The Froggie Song.” Most of the songs have some piece of the title somewhere. And Kelli was very deliberate about including these sounds in her songs, “I love that simple sounds like these in songs for kids and their grownups help make it easier for them to sing along before they know the words. As a songwriter dedicated to craft, I think a lot about those kinds of details. As a mother dedicated to her young children, I care a lot about the songs being smart, accessible, and fun.”

This album is a compilation of favorite Kelli Welli sing-a-long and storytelling songs, along with some new tunes, and the lullabies she wrote during her first year as a new mom to boy/girl twins. Kelli’s original songs, often inspired by the kids and animals in her life, weave unique, sometimes silly tales, celebrate love, sunshine, nature, different languages, and honor the details that come with raising the amazing little people in our lives. The album was produced by masterful musician Timothy James Uecker and excellent recording engineer Gabe Johnston at Falcon Recording Studio in Portland. It features children’s voices and musical talents of some parents whose kids a few songs were written for.

Listen to the album now on SoundCloud: https://soundcloud.com/kelli-welli/sets/ooh-la-la-too-doo

Free Download Activity to go with the album: The “Pick-a-Song” fortune teller style fold-up and play activity is a free download that parents can print out for their kids to play along with the album.

About Kelli Welli: Kelli Caldwell is an active songwriter in both the Children’s and Singer-Songwriter/Americana “grown-up” music arenas, mainly performing for kids as Kelli Welli. She’s released several children’s EPs and singles over recent years and though she’s new to the thriving Portland kindie scene, was named TOP 5 Parent Picks for 2020 by PDX Parent Magazine. Drawing on her unique upbringing (more below), Kelli’s wide-ranging songwriting for children is smart, fun, often hilarious, sometimes reflective and deeply sweet. Always genuine. Kelli’s been called, “hysterical and superbly talented” by fellow artists and parents often say, “This is music I can actually listen to over and over… and over… and still enjoy!” And a local fan mom recently wrote to say, "I've cried twice now when listening to 'I'm in Love with You.' Such lovely songs!"

Kelli has a Master of Publishing degree and a B.A. in Speech Comm with minors in Japanese and German. After working in PR for Harper's Magazine in NYC, she returned to Portland and started a corporate publishing business before focusing more full time on motherhood and music. Kelli has studied speech-level singing with The Voice Project and spent 8+ years as a key member of the Portland Songwriters Association board, is a member of West Coast Songwriters, Nashville Songwriters Association, Children’s Music Network, and SCBWI (Society of Children’s Book Writers and Illustrators).

About NAPPA: Integrity and honesty are at the core of what NAPPA stands for. For over 30 years, the
National Parenting Product Awards (NAPPA) has been ensuring that parents purchase the highest quality products that help them connect and enjoy time with their families. NAPPA’s team of evaluators, along with parent and child testers, select the best baby gear, toys, apps, games, books, music, and other family must-haves to be award winners through year-round product testing. For more information, visit NAPPA. For additional questions, contact NAPPA Director Elena Epstein: elena.epstein@nappaawards.com or 818.264.2222, ext. 222. | #NAPPAAwards #NAPPAWinner #PlayLearnConnect

Link to the album cover: http://kelliwelli.com/KELLI_WELLI_ooh_la_la_too_doo_NAPPA_award.jpg

Link to the “Pick-a-Song” activity to go along with the album: http://kelliwelli.com/downloads/coloring_pages/Kelli_Welli_Pick_a_Song_Activity.pdf