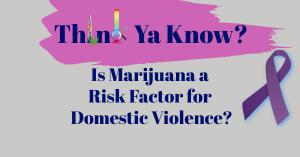 A New Educational Report by PopPot.org

Domestic violence is linked most of the time to substance abuse, including marijuana, says a nonprofit which educates parents about cannabis risks and harms.

The legalization of marijuana will only increase domestic violence in the US, just as it appears to be increasing the rate of deaths from child abuse and neglect.”
— Julie Schauer

WASHINGTON, DISTRICT OF COLUMBIA, US, October 26, 2020 /EINPresswire.com/ — A parent education nonprofit issued a report last week on the science and news reports linking marijuana to domestic violence. Parents Opposed to Pot (PopPot) warns that unless we focus on the role substance abuse plays in toxic interpersonal and family relationships, and gender-based violence, we won’t solve these societal problems, nor protect people.

Think Ya Know? Is Marijuana a Risk Factor for Domestic Violence? was published by PopPot after several years of study and accumulating of evidence, including scientific studies, news reports and testimonials. The goal of the report is to engage politicians, social workers and parents by making the case against legalizing and promoting marijuana. PopPot will reach out to nonprofits concerned with violence against women to encourage them to focus on the role of drugs as an underlying force which contributes to domestic violence.

A longitudinal study that tracked more than 9,000 subjects from age 15 to 26 showed that early marijuana users are almost twice as likely to be perpetrators of intimate partner violence (IPV), and more than twice as likely to be victims. This study suggests that politicians and domestic violence activists need to target adolescent marijuana use, because it is likely to increase the likelihood of IPV in young adulthood. Some of the studies PopPot references control for other risk factors for domestic violence, such as alcohol use.

"Most people know the connection between drunken rages and intimate partner violence, but they’re less aware of the risks from marijuana use which affects the brain differently. If we ignore the fact that marijuana use, like other drugs, contributes to domestic violence, we will not make much progress against gender-related violence. The legalization of marijuana can only increase domestic violence in the US, just as it appears to be increasing the rate of deaths from child abuse and neglect," said Julie Schauer, Vice President of Parents Opposed to Pot.

The PopPot report documents the numerous shocking incidents of violence committed against entire families. In one case, a 22-year-old man who had been smoking pot since middle school and had a diagnosed cannabis use disorder, killed not only his parents, but his girlfriend and her parents. In another case, a 19-year-old man drove 1200 miles, from Seattle to Southern California, to gun down his parents and siblings after obsessive use of the drug and playing video games. Links to the news stories about these and other domestic homicides are included in the report. Doctors and scientists throughout the world have connected marijuana to psychosis, and it’s especially during the prodromal stages of psychosis that irrational and paranoid attacks against family members or partners can take place.

The new report is part of the organization’s Think Ya Know? series, which asks and answers important questions about marijuana. Past topics have included: social justice, addiction, marijuana vs. alcohol, and how to know if your child is using. Each report contains relevant statistics, science, and testimonials and activism action steps. A short original video on the subject is also part of the report. Future topics will include marijuana and these issues: driving, mental illness, sports performance, black market, environment.

Parents Opposed to Pot, a 501c3 education nonprofit, based near Washington, D.C., is a go-to source for parent education on cannabis culture, cannabis news and anti-marijuana activism. The nonprofit takes a firm stand against any non-FDA-approved marijuana. Their blog shares many personal testimonies of the damage wrought by marijuana use. PopPot actively tracks news reports of child deaths due to cannabis using adults, news stories of DUID traffic fatalities, and drug-fueled domestic violence. Interested parents can subscribe to their news feed at PopPot.org or follow the group in Facebook @poppotorg, Twitter @poppotgroup and Instagram @everybrainmatters. PopPot aims to burst the myths of the marijuana legalization effort by sharing the truth about the risks and harms of marijuana. Personal story submissions are welcome and can be sent to the editor@poppot.org.

Video Warning About Link Between Marijuana and Domestic Violence