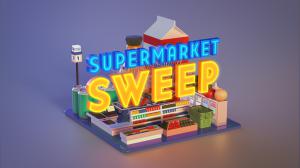 UNIVERSAL CITY, CA, UNITED STATES, October 26, 2020 /EINPresswire.com/ — Weimar Pictures, the premier experience for high-end broadcast graphics, is proud to announce their work in the successful rebrand of the American classic game show, Supermarket Sweep on ABC. Working hand in hand with Freemantle, ABC, and Leslie Jones, Weimar Pictures was able to conceptualize, create and deliver a complete graphics package that brought the hit classic back to life, expanding its horizon using over 465 custom game graphics—more than any network prime television program.

Supermarket Sweep became a beloved television program in the '90s for its humorous and competitive spirit as contestants use their grocery shopping knowledge to win cash prizes. To rebrand the American treasure, Weimar Pictures experienced team of designers, illustrators and animators used an “Isometric” approach, immersing the viewer into the world of Supermarket Sweep, to provide an unparalleled experience to prime time television. The exclusive graphics include but are not limited to:

The rebranded fun filled roller coaster ride, which aired on October 18th, 2020, became a massive success with over 4.78 million viewers. Gaining accolades and recognition near and far for their extensive work on this prestigious program, Weimar Pictures takes a great deal of pride in this project in particular.

"The goal from the start was to bring back those warm nostalgic feelings of the beloved original, without making everything feel too retro. We used bright colors like yellow and orange/red to draw the audience's eye against deep blues; flipping the script on traditional game shows. Alycia Rossiter, Wes Kauble (The shows Executive Producers), and of course the great Leslie Jones were a blast to work with. From the very start, there was a sense of deep collaboration amongst all team members that inspired the Podiums, and the production design. I think we created something quite special with this show.” – Robert Uncles, Vice President & CCO of Weimar Pictures

Through proof of concept, dedication to the craft, an unwavering commitment to excellence, Weimar Pictures’ purpose-driven vision has come to fruition with the successful hit of Supermarket Sweep on ABC.

Weimar Pictures is the premier experience when it comes to high-end graphics. From broadcast networks to streaming and digital services, Weimar Pictures’ team of illustrators, designers, and animators offer a unique, unparalleled experience to create a fresh approach to brand identity and marketing for their clients. Founded in 2012 by brothers Thomas and Robert Uncles, Weimar Pictures has rapidly risen to the top of the industry, having recently worked on projects like HBO Max's Haute Dog, Craftopia, Selena + Chef, and ABC's upcoming reboot of Supermarket Sweep with Leslie Jones, NBC's Making It (S1-2), as well as the Facebook original Steve On Watch. Weimar Picture's commercial work has been featured on national ads for clients such as VW, Sprint, Taco Bell, Pizza Hut, Snapple, eBay, The Academy Awards, SAG, and The New York Times. Recent accolades include the 2018 Telly Award for our achievements on The Voice, as well as the 2018 Cannes Lion for our work on Revival – an Eminem and Interscope Records collaborative campaign.