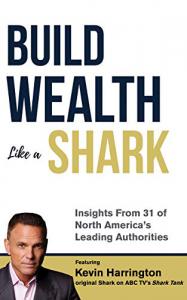 Building wealth means more than just accumulating the wealth, it means preserving, protecting and passing on the wealth.”
— Scott Keffer

PITTSBURGH, PA, US, January 18, 2021 /EINPresswire.com/ — Building wealth has always been a challenge that only a few have accomplished successfully. According to Spectrem Group’s Market Insights 2020, only about 3 percent have successfully accumulated $1 million dollars or more.

Imagine having wealth building tips from 31 of North America’s leading authorities. That was the idea behind Scott Keffer and Kevin Harrington’s latest book, “Build Wealth Like a Shark: Assemble an all-star cast of advisors who would each share a chapter on wealth creation and preservation.”

They each contributed a chapter and three tips along with an opportunity for additional resources.

Readers will discover, among other insights:
• The biggest financial and tax obstacles to build and keep wealth
• The principle of “true wealth”
• The seven major financial blind spots
• How to avoid one of the worst retirement-income strategies
• The three reasons never to invest in real estate
• How to avoid financial divorce disasters

Besides gaining fame on Shark Tank, Kevin Harrington is the creator of the As Seen on TV brand, and is a co-founding board member of the Entrepreneur’s Organization. His behind-the-scenes work in business ventures has produced well over $5 billion in global sales, the launch of more than 500 products, and the making dozens of millionaires. Twenty of his companies have each topped $100 million in revenue.

Scott Keffer, CEO of Scott Keffer International, is an international business growth coach, best-selling author, and keynote speaker. As an authority on business growth and marketing, Keffer has been interviewed on radio and TV and has spoken at most major financial industry conferences. Keffer, known as The Million Dollar Mentor, has been called an “industry transformer” for his innovative systems and processes. Through his speaking engagements, training, and coaching, Keffer has trained tens of thousands of financial planners, investment advisors, and wealth managers from across the U.S., Canada, and Australia.