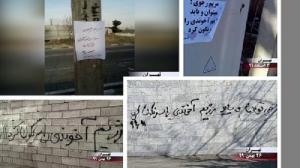 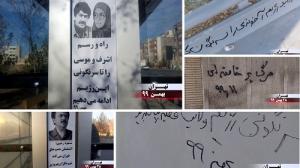 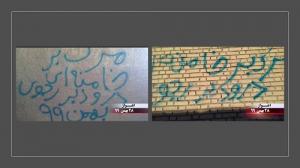 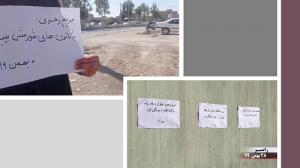 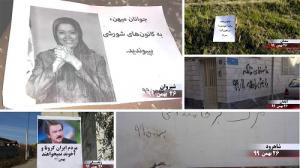 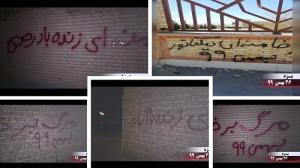 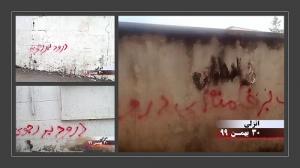 "The clerical regime can and must be overthrown."

Some of the slogans were: "Khamenei is a murderer, his rule is illegitimate," "Down with Khamenei’s dictatorship, hail to Rajavi”
— NCRI

PARIS, FRANCE, February 24, 2021 /EINPresswire.com/ — During the week of February 14 to 22, 2021, supporters of the Mujahedin-e Khalq (MEK/PMOI) and Resistance Units wrote slogans and posted banners carrying the messages of the Resistance’s leadership, Mrs. Maryam Rajavi, the President-elect of the National Council of Resistance of Iran (NCRI) and Massoud Rajavi, the Leader of the Iranian Resistance, in various cities in Iran. These activities were carried out in Tehran, Ahvaz, Ramsar, Iranshahr, Shadegan, Sari, Hamedan, Rudsar, Bushehr, Shahrekord, Zabol, Yazd, Urmia, Semnan, Abadan, Shirvan, Zanjan, Shahroud, Tabriz, Shahriar, Karaj, Anzali, Rasht, and Shiraz. The people in these cities enthusiastically welcomed the campaigns.

Some of the slogans were: "Maryam Rajavi: The continuation of protests and strikes is indispensable to the continuation and expansion of the uprising," "Maryam Rajavi: Hail to the Resistance Units who have rebelled for freedom," "Massoud Rajavi: The Iranian people do not want COVID-19 and the clerical regime, “Down with Khamenei, hail to Rajavi," "We can and we must overthrow this regime," "Khamenei is a murderer, his rule is illegitimate," "Down with Khamenei’s dictatorship, hail to Rajavi," " Khamenei get lost! The Iranian people reject you," "To Iranian youth: Join the Resistance Units," “Massoud Rajavi: The army of the hungry are ready for revolt and uprising," "The rebellions will rise up and open the way for the uprising.”